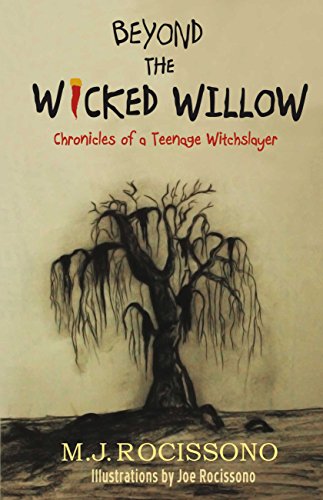 Beyond the Wicked Willow, by M.J. Rocissono

“In 2012 two things changed the life of fourteen-year-old Frankie Fretini forever. The first was the death of his father—we’ll talk more about that later. The second thing was the malocchio. What’s the malocchio, you ask? The Italian evil eye. A curse, jinx, hex, hoodoo. A whammy.”

So begins the story of Frankie Fretini, whose ancestors encountered a witch almost eight hundred years ago, leaving behind a paranormal mess he’s about to inherit. Frankie and his friends hide from a bully in a carnival fortune teller’s booth and end up in the Middle Ages, with no choice but to track down the witch and deal with her if they ever want to get back home.

It’s a middle grade book written at an appropriate level for middle graders, so don’t expect a nuanced read. Like any good tale for young readers, it’s more of an external than an internal journey, filled with action and adventure and stories within stories. (And an array of fart jokes that are sure to delight even the most hardened of twelve-year-old critics.)

If you can imagine an Afterschool Special mash-up of The Goonies and the Dungeons & Dragons cartoon series, you’ll be in the right ball park. Don’t know either of those? Here, we’ll help you out.

They’re both from the era that inspired Stranger Things, and if it seems like we’re digressing down a side road here, we’re not really. We’re just giving you a taste of the book, which caters to the knight errant wanderings of the middle grade imagination.

Although the story focuses on the adventure, there’s some real depth behind the scenes, too. Frankie is still dealing with the death of his father, and there’s a genuine emotional story arc lurking beneath the surface, handled in a subtle way that feels appropriate for the target age range.

THE BOTTOM LINE: This debut novel delivers on the promise of magic and adventure, whisking the reader across multiple historical time frames and settings. Layered tangents might create some confusion, but middle grade readers will find plenty here to love.