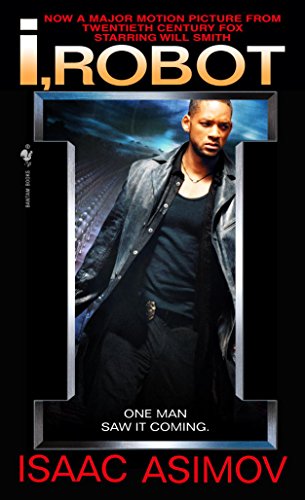 I, Robot, by Isaac Asimov

The future is here.

A sci-fi classic, Asimov’s anthology of robot stories set the bar for generations to come. With eerie prescience, Asimov paints nine different portraits of our future with robots. For fans of Humans and Westworld.

Congratulations! You found another Dragon’s Code!

In case you’re new to the blog, we’ve been celebrating 50 Years of Pern this month, getting ready for the publication of Dragon’s Code on October 2! We’re giving away Kindle cards and books, and we’ll be announcing the next prize soon! So write down that code and keep following the blog for our next giveaway announcement!

Here are stories of robots gone mad, of mind-read robots, and robots with a sense of humor. Of robot politicians, and robots who secretly run the world—all told with the dramatic blend of science fact and science fiction that has become Asmiov’s trademark.

The three laws of Robotics:

With these three, simple directives, Isaac Asimov changed our perception of robots forever when he formulated the laws governing their behavior. In I, Robot, Asimov chronicles the development of the robot through a series of interlinked stories: from its primitive origins in the present to its ultimate perfection in the not-so-distant future—a future in which humanity itself may be rendered obsolete.

Using our links to visit Amazon supports us with a small percent of anything you buy during that visit, from books to major appliances. Nobody pays us to recommend anything. We just find stuff we like.