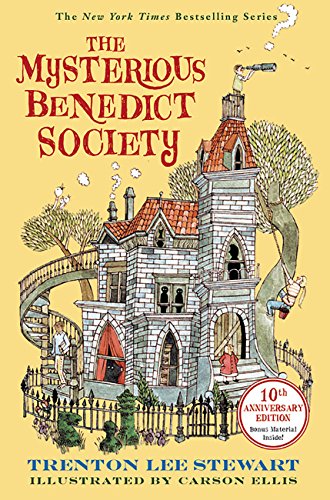 Given the overwhelming popularity of this title, we’re ashamed to admit we only learned of it last year, and by accident at that. A young reader told us our first novel was one of his two favorite books ever. Our reaction? Shock. Stunned silence. I’m not crying, you’re crying.

Steven recovered first. He always does. He thanked the young man quietly. Complimented him on his reading level. Said all the right things. The embodiment of grace under pressure. Me? I’m more of a blurt things out and think later kind of gal.

“Just out of curiosity, what’s the other one?”

With over 100,000 ratings on Goodreads (yes, that’s the right number of zeros–we checked twice), The Mysterious Benedict Society is sitting at an impressive 4.15 average rating. The print version is 497 pages, so it’s long for a middle grade novel. But perfect for anyone who wants a light and engaging read that won’t be over in an hour. It’s been on our own TBR for ages. The sale (through the end of the month) makes this a great time to pick it up.

For fans of Lemony Snicket and Escape from Mr. Lemoncello’s Library, this first book in the bestselling, award-winning Mysterious Benedict Society Series is not to be missed!

“Are you a gifted child looking for special opportunities?” Dozens of children respond to this peculiar ad in the newspaper and are then put through a series of mind-bending tests, which readers take along with them. Only four children–two boys and two girls–succeed. Their challenge: to go on a secret mission that only the most intelligent and inventive children could complete. To accomplish it they will have to go undercover at the Learning Institute for the Very Enlightened, where the only rule is that there are no rules. But what they’ll find in the hidden underground tunnels of the school is more than your average school supplies. So, if you’re gifted, creative, or happen to know Morse Code, they could probably use your help.